Developed in the US in the 1870s, the poultry breed originated in upstate New York. It is named for the indigenous Wyandotte Nation of the region, though the chickens have no direct historical association with that Native American tribe. Today, the Wyandotte breed contains several color variations.

Adapted from breed information provided by the Wyandotte Nation:

Wyandottes are a true American breed of chickens developed in New York state in the early 1870s. They get their name from the Wyandotte Nation, but they have no direct historical association with the tribe. The original Wyandotte was the Silver Laced Wyandotte, which was first accepted into the Standard of Perfection in 1883.

The Silver Laced Wyandotte was first referred to as the American Sebright or Sebright Cochin.  There is a bit of mystery as to the true origin of the Wyandotte, but the Silver Spangled Hamburg and the Dark Brahma was used to make this breed.  White Wyandottes and Black Wyandottes were a result of sports produced from the Silver Laced Wyandottes.  The Columbian Wyandotte was then produced by crossing a White Wyandotte with a Barred Plymouth Rock. The name Columbian comes from the Columbian Exposition/World’s Fair or Chicago Worlds Fair of 1893. The fair celebrated the 400th anniversary of Christopher Columbus’s arrival to the Americas in 1492.

The Golden Laced Wyandotte originated in Wisconsin and was produced by mating Silver Laced Wyandotte females with a cross-bred Cochin-Brown Leghorn Cockerel. The Buff Wyandotte was originally said to be a light colored Rhode Island Red.

Today there are many more color varieties of Wyandotte, with the Blue Laced Red being one of the most recent.  Famous for their docile disposition, the ability to lay in cold weather, and the utility value for table use the Wyandotte breed remains popular today. 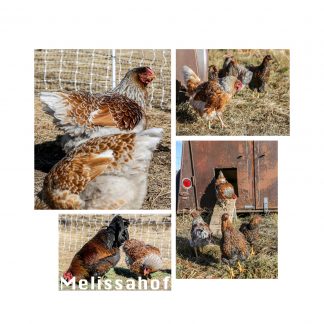