Keep your flock hearty. Give it heritage.

Originally bred in France to lay eggs for the Paris winter market, Faverolles are now listed as threatened with fewer than 5,000 chickens registered globally. The breed is named for the village of Faverolles, located in the Eure-et-Loire region just southwest of Paris. The Faverolles were imported into America in 1901.

Characteristics: Active, yet gentle. The breed sports a beard, muff, feathered legs and feet, and a fifth toe. Males are straw-colored with reddish brown and black markings. Females are a creamy white and salmon brown.

Cold Tolerance: The breed was developed for winter egg laying and has thick plumage and stocky build.

The Livestock Conservancy provides the below history of the heritage breed:

The Faverolles chicken breed takes its name from the village of Faverolles, located in the Eure-et-Loire region just southwest of Paris, France. The breed was developed by crossing many other chicken breeds and then selecting for production qualities alone. Breeds used in its development were the Houdan, Brahma, French Rennes, Flemish Cuckoo, Malines, and Dorking. For many years Faverolles chickens were a varied and mixed lot, but by about 1886 a distinct type emerged and some consistency in plumage color materialized. The breed was introduced into England in 1894 and was imported into America by Dr. A.H. Phelps of Glen Falls, NY, in 1901 or 1902.

Faverolles chickens come in many color varieties, but in America only the Salmon and the White varieties have been embraced. The White variety was developed and refined about 1905. When most people think of the Faverolles breed it is the Salmon variety that they are visualizing. Salmon is a unique color pattern found exclusively on the Faverolles chicken. The males appear as a much lighter colored Golden Duckwing compared to males of other breeds. The females appear as a much more lightly colored Wheaten than females of other breeds.

Favorelles chickens are medium-sized, with deep compact bodies, feathered shanks and toes, and beards. With their “fluffy” appearance, it is easy to overlook the fact that this breed was developed with meat production and winter egg laying with the great Paris market in mind. Faverolles chickens combine early maturity, hardiness, and great egg-laying with fine flesh qualities. During the 1900s it was considered the best French breed yet produced. Faverolles chickens are recognized as a standard breed by the American Poultry Association in two varieties: Salmon in 1914; White in 1981.

There are no reviews yet.

Only logged in customers who have purchased this product may leave a review. 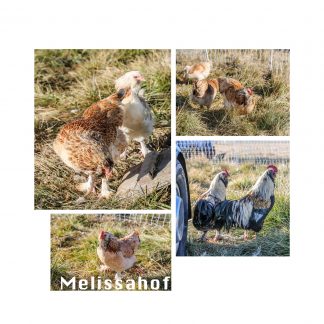